Routes in Menorca... under the sea! Species you will find snorkeling.

Compartir
Experience the best snorkeling adventures in Menorca with this short guide that will help you identify the most common species.

Menorca is one of the favorite places for snorkeling fans, as the seabed that surrounds the island is rich in species and offers amazing landscapes. Diving in these crystal clear waters feels like entering a new world. Knowing this, you won´t be able to stop exploring the best Menorca sea routes! So just open your eyes and enjoy.

Approximately 70% of Earth is covered by water and, to this day, we are still very ignorant of what goes on down there. Although exploring the seas and oceans in its entirety is impossible, it is interesting to dive near the coast to explore the underwater landscape and wildlife. It´s breathtaking to find such a diverse ecosystem, completely different to what we usually find on the surface. The light, the temperature of the water, the depth or the currents set up different environments, making each dive unique.

In Menorca you will find a shallow seabed (ranging from 0 to 200 meters) that expand as you move away from the island (1,000 meters). The most iconic landscapes of this area are the beautiful posidonia oceanica meadows and the corals where snorkeling becomes a true pleasure.

In fact, thanks to the mentioned posidonia oceanica meadows that grow in Menorcan shores you will enjoy clean and transparent waters perfect for snorkeling and swimming. These marine plants are responsible for cleaning the water and keeping the marine ecosystem alive. 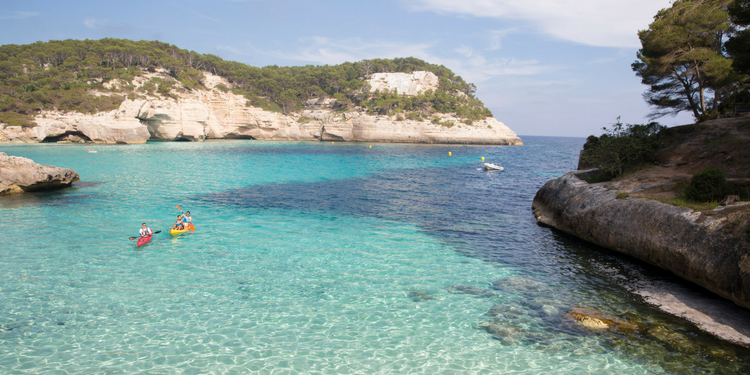 One of the most interesting routes in Menorca to dive is the Marine Reserve of the North Coast, where you will find groupers, morays, starfish, squid ... Also, in Punta Prima, in the south of Menorca, you will be able to see a sunken plane and around the whole island there are also many wrecked ships.

Another interesting idea is to do a kayak trip along the coast of the island, entering caves and reaching inaccessible beaches in order to immerse yourself in the tranquility of its waters. In the ARTIEM team we have experts who organize daily excursions or, if you prefer, guide you so that you can kayak through Menorca sea routes on your own.

In case you decide to go snorkeling without the company of a guide, we have created, with the help of Miquel from ARTIEM Audax reception team (and Menorcan sea lover), a list of routes in Menorca to help you identify all the underwater species that you might find! Pay attention because you´ll probably see many of them.

About 30 centimeters long, this species is identified by a blue spot on its belly area. It´s a very common species in Menorca and is often seen in rocky bottoms or posidonia oceanica meadows. 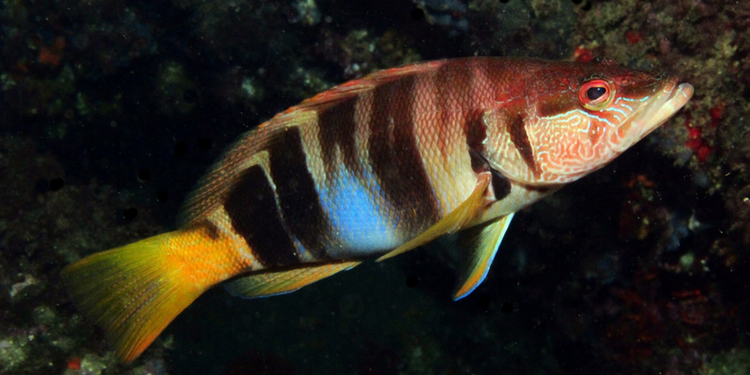 It´s a very curious and Smart fish. Its basic colors are silver gray with a black spot at the base of the caudal fin surrounded by a white ring. 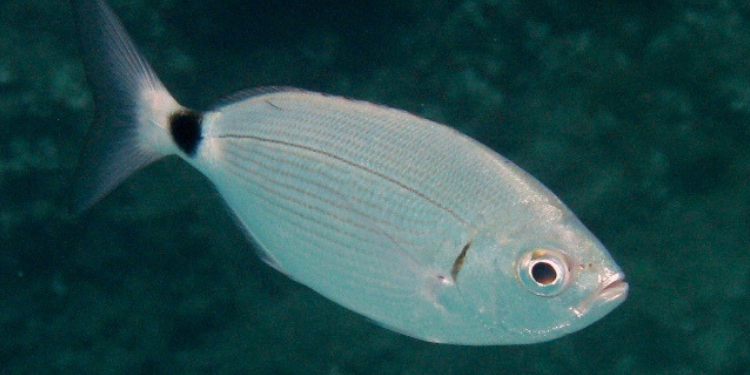 This species needs no introduction: it looks like a sea snake. It´s usually found among the rocks, showing its threatening teeth. Although it´s not very dangerous, it´s better to keep some distance between it an us. 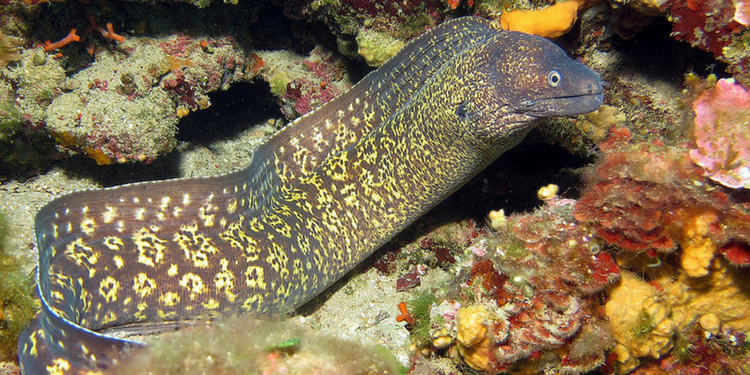 Also a very common fish that can be seen in any type of seabed. It is distinguished by the double black line that appears behind its head and at the base of its tail. 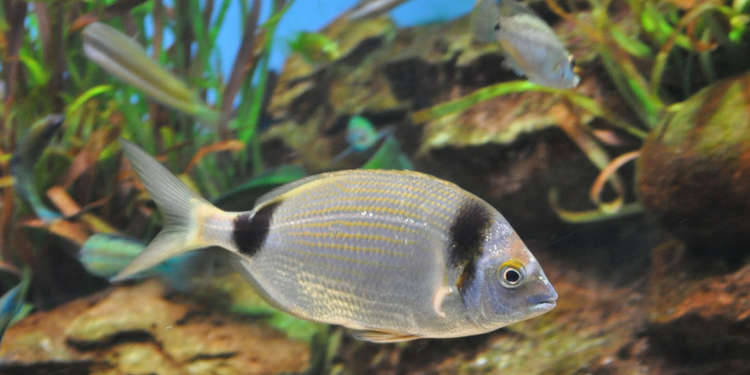 This is a herbivorous fish so it is usually close to algae or posidonia. It´s usually easy to spot and very common in Menorcan waters. To identify it, you´ll only have to look at its horizontal yellow striped pattern. 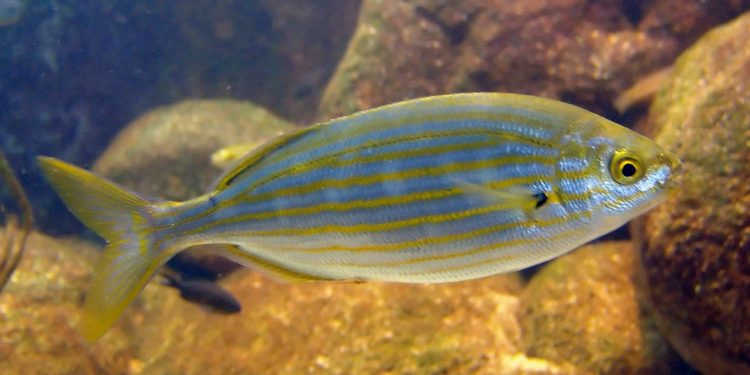 Its common name comes from the characteristic golden stripe that appears between its two eyes and also by a small red spot on the cheeks. They move between the algae of rocky areas or sandy surfaces at low depths. 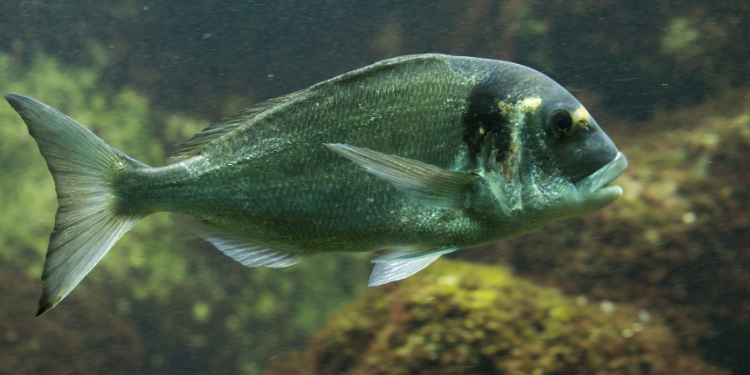 With a dark color, it has a length around 10 cm and its body is almost flat on the sides. The juveniles, up to one centimeter in length, show a striking electric blue color. They are grouped in fairly dense shoals at shallow depths. 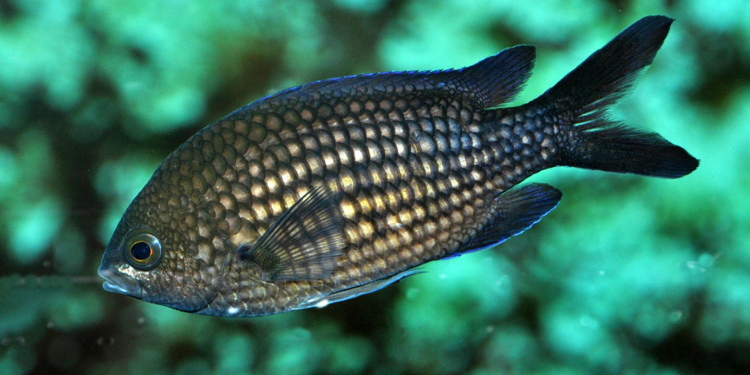 This silver-gray fish loves to swim along the sandy bottoms of the beaches, throwing sand from its mouth to discover buried food. It is characterized by the dark bars on the sides of its body. 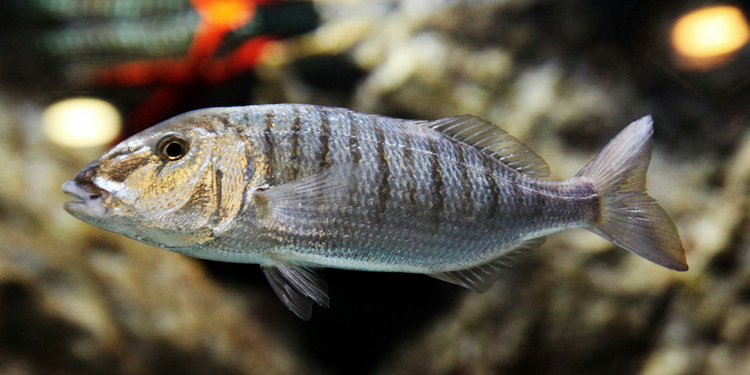 There are several species of mullets with similar characteristics. They are fish with a long body, large eyes, olive green back and silver sides with large scales. They usually swim near the surface in large groups. It´s easy to confuse them with sea bass. 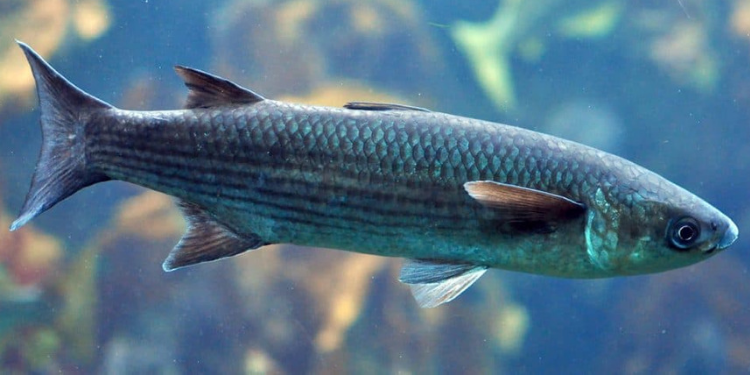 It´s a solitary fish. It moves around a limited area, but with a good number of holes where finding shelter. The fish will use some of these holes as a “home”, while the others will only be temporary shelters where hiding from any threat. It´s brown with greenish spots and its lower jaw protrudes in relation to the upper one. 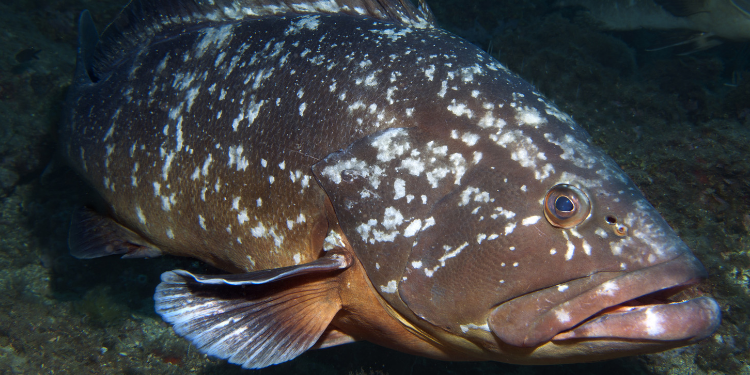 With this short and simple guide you will be a bit more prepared to discover part of what Menorca hides underwater and find yourself surprised with its landscapes and variety of species. Don´t forget to pack your diving goggles and fins in order to discover some wonderful routes in Menorca for snorkeling. At ARTIEM Hotels we will be delighted to welcome you and advise you on your underwater adventure on the island.

What to do in Mahón: discover the capital of Menorca

DISCOVER OUR HOTELS IN