What to do in Mahón: discover the capital of Menorca

Compartir
Do you want to discover the capital of Menorca as a local? Follow these recommendations that combine essential places and other more secret that only a few know.

Mahón, Maó or “Mo” for locals, is located at one end of the island of Menorca. This small city, which was established next to the second largest natural port in the world, is overflowing with charm and history. If you want to know what to do in Mahón, be sure to consult this list with the must-see places and a few secrets that only the locals know.

But first we want to stress the importance of travelling with respect for the inhabitants, their culture and the environment, by not leaving litter or waste and respecting privacy when taking photos, to avoid disturbing the local and other tourists. Now is the time to discover Mahón.

1. The port of Mahón

As we already mentioned, the port of Mahón is the second largest natural port in the Mediterranean, as it is comprised of an inlet with a length of more than 6 kilometres that allows ships to enter it safely. For this reason, historically speaking, it has been a key port on trade routes since it was first used in the 3rd century B.C.

In the middle of the port there are two islands, Isla del Rey and Isla de Llatzaret, which can both be visited by ferries that leave from the port itself. On them you will see some impressive constructions that date from the 18th century.

But the port of Mahón is much more than a historical site. It is also filled with bars, restaurants, boutiques and night life, and is the perfect place in which to take a stroll and have a meal, or see the commercial side of the island in a different way.

And if you want to see an amazing sunset, the views from the port are absolutely stunning. We certainly recommend it. 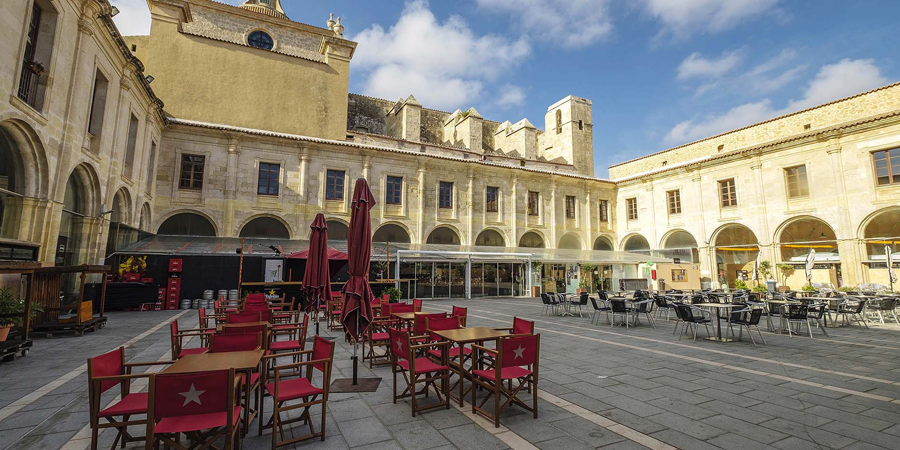 Menorcan food and crafts are just some of the island’s attractions. And one of the places you should visit in order to enjoy them is the Mercat des Claustre. The market is open every day of the week from Monday to Friday from 7 a.m. to 9 p.m., on Saturdays from 7 a.m. to 6 p.m. and on Sundays from 7 a.m. to 3 p.m.

It has more than 30 stalls that sell all kinds of products such as fruit, vegetables, meat, cheese, crafts and clothes, among others. It’s the perfect place to try and discover the most traditional things on the island, from Mahón cheese, to sandals with rope soles and wicker handbags.

Not only is this market a model in promoting local trade, it is also a relevant place in the world of art and culture of the island. Concerts are held in the middle of the courtyard, under the title Es Claustre, featuring pop, jazz, rock and flamenco performed by national and international artists. The top floor of the building also houses exhibitions and is used for staging all kinds of cultural events.

Other thing to do in Mahón is taking a walk to Plaza de España where the Fish Market is located (known by locals as the Mercat de Peix or Peixateria), just a few metres from the Mercat des Claustre. It is open from Tuesday to Saturday between 7 a.m. and 2 p.m. The gastronomic market opens on Fridays, Saturdays and Sundays from 11 a.m. to 4 p.m. and from 7 p.m. to 11 p.m.

It was built between 1926 and 1927 and was designed by the local architect Francesc Femenies. It is a rectangular building with porches around the perimeter and a hexagonal kiosk in the centre that is used for internal service purposes. The market is divided into two parts: the fish market with the traditional slabs where the freshest products are laid out; and the gastronomic market, where you can taste the market products.

Inside it are a few bars that serve food at midday. In the summer, it has a great atmosphere during the day and at night; and in the winter, it is a meeting point for locals who want to enjoy an aperitif at the weekend. 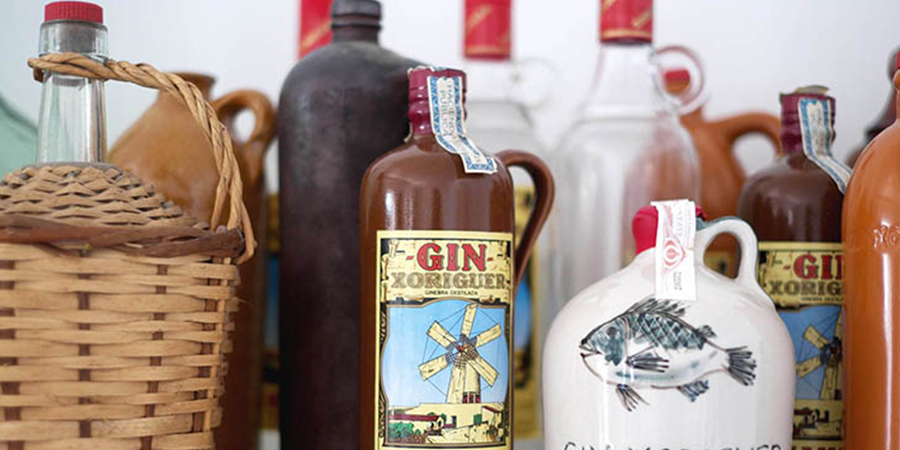 Have you tried the famous Menorcan gin? Visit the factory that makes Gin Xoriguer, the island’s local gin and probably the oldest gin in the Mediterranean. Destilerías Xoriguer has a very interesting history in which fire, perseverance and the presence of the British Crown were the elements that gave life to this drink, whose recipe dates from 1700. The gin is still made using artisan processes and the distilleries where the factory was established are more than 250 years old.

Aside from its unique taste and aroma, the bottle is an element that sets it apart from others. The handle on the neck was used to transport it when it was sold in bulk. A detail that has remained to this day.

To find out all its secrets and taste one of the most emblematic drinks on the island on the gin scene, book your visit here.

Still looking for what to see in Mahón? Try checking the Church of Santa María, one of the largest and most beautiful on the island. It is located in Plaza de la Constitución, next to the Town Hall, surrounded by bars and terraces from which you can admire it as you enjoy the most emblematic dishes of Menorca.

It was built in the 18th century on the former site of an ancient 13th-century Gothic church. Its interior is inspired by the neo-Gothic style and it has one of the best conserved ornate organs on the island. Having the opportunity to listen to music played on this fantastic instrument is a worthwhile experience. 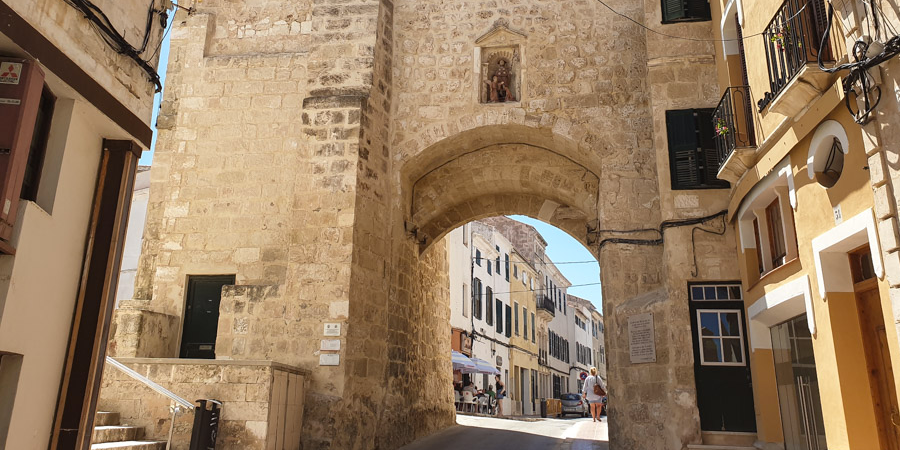 The Bridge or Grand Gate of St. Roch is all that remains of the ancient medieval wall of the city. It marks the route to the interior of the island in the direction of Sant Climent and Ciutadella.

It was built in the 14th century pursuant to the Royal Order of King Pere IV, of August 21st of 1359. During its existence, the Gate has been remodelled on many occasions due to attacks and conquests. One of the most important was the attack of the pirate Red Beard who ransacked the city of Mahón in 1535.

As for its name, it was formerly known as Portal de Dalt (the Upper Gate) as it was located on the other side of Portal de Baix (the Lower gate), in calle de Isabel II. It was also known as Portal d’en Servera, after the family who lived next to it. But since the 18th century, it has been called the Gate of St. Roch after the saint that is next to the gate.

If you want a good breakfast, tea or simply a delicious snack, pay a visit to Es Llonguet. This bakery is famous for its decoration and the variety and quality of its products.

Whether you have a sweet or a savoury tooth, here you’ll find a wide variety of popular delicacies from the island of Menorca. From traditional pastries like rubiols, formatjades, canyes de sobrassada, croissants, rolls or mini-llonguets, to delicious white coffee, natural fruit juice or hot chocolate, among others.

Another great idea of what to do in Mahón would be visiting Museum of Mahón, it's a must! This is the most important museum on the island. It has a very impressive exterior, as the museum is located in an ancient Franciscan convent dating from the 15th century. The interior will take you back to past eras on the island of Menorca.

Its halls allow you to take a look at the island’s history from prehistoric times to the present day, through more than 200,000 exhibits. The Museum of Menorca is the centre of reference for the diffusion of the heritage and culture of Menorca, and it has promoted an important research project with a specific focus on the prehistory of the island. 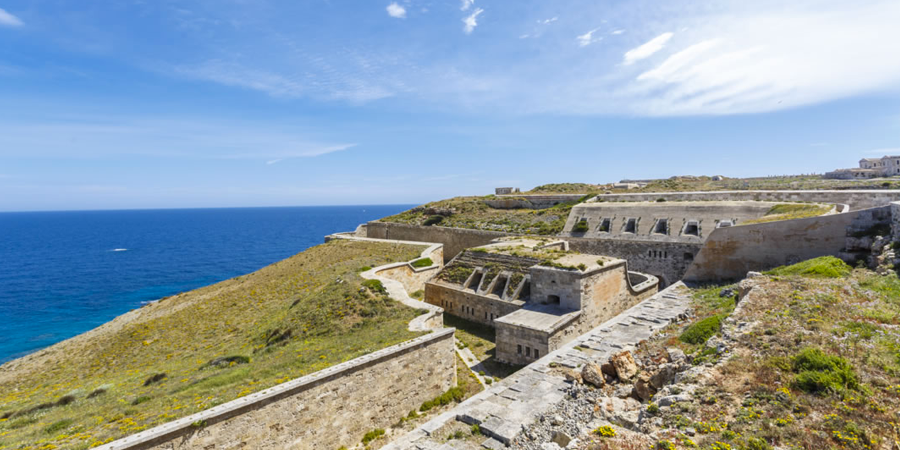 It is located on the peninsula known as La Mola, and was built between 1848 and 1875 to defend Menorca from the threat of the British. La Mola Fortress is one of the finest examples of 19th-century military architecture on the island.

La Mola Fortress was also known as the Fortress of Queen Isabel II, as she was the one who ordered it to be built. It played a crucial role in defending the island of Menorca from the attacks of the British army.

It is in an exceptional state of repair, as despite the threats of other armies, it was never attacked. Visiting hours vary, depending on the time of year:

10. Beaches and coves near Mahón 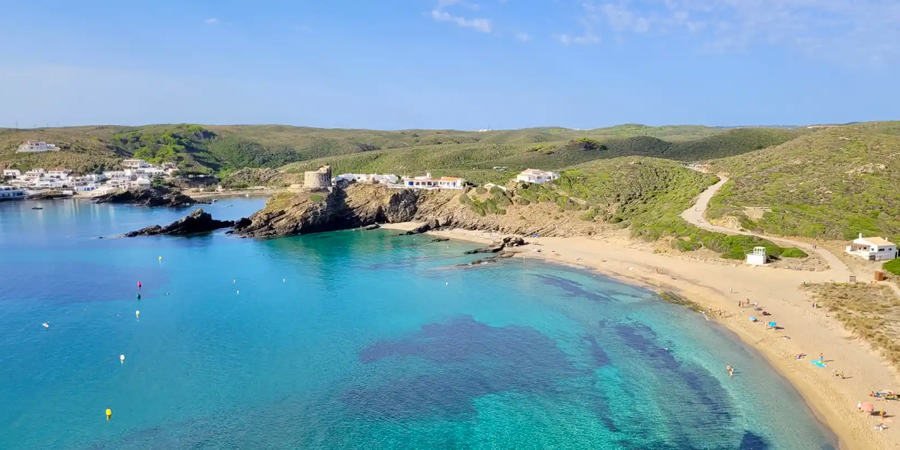 If you are in Menorca in the summer and you want to take a dip in the sea near Mahón, there are many amazing beaches and coves. From Mahón you can get to both the southern and the northern beaches and visit them depending on the direction of the wind.

Now you know what to see in Mahón in one day, or what to do if you are staying for longer in Menorca.

Where to sleep in Mahón?

Our hotels in Mahón allow you to stay in two very special sites: one in the natural port, where you can see the ships from the window of your room, and another in the city centre, with spectacular views from the rooftop. 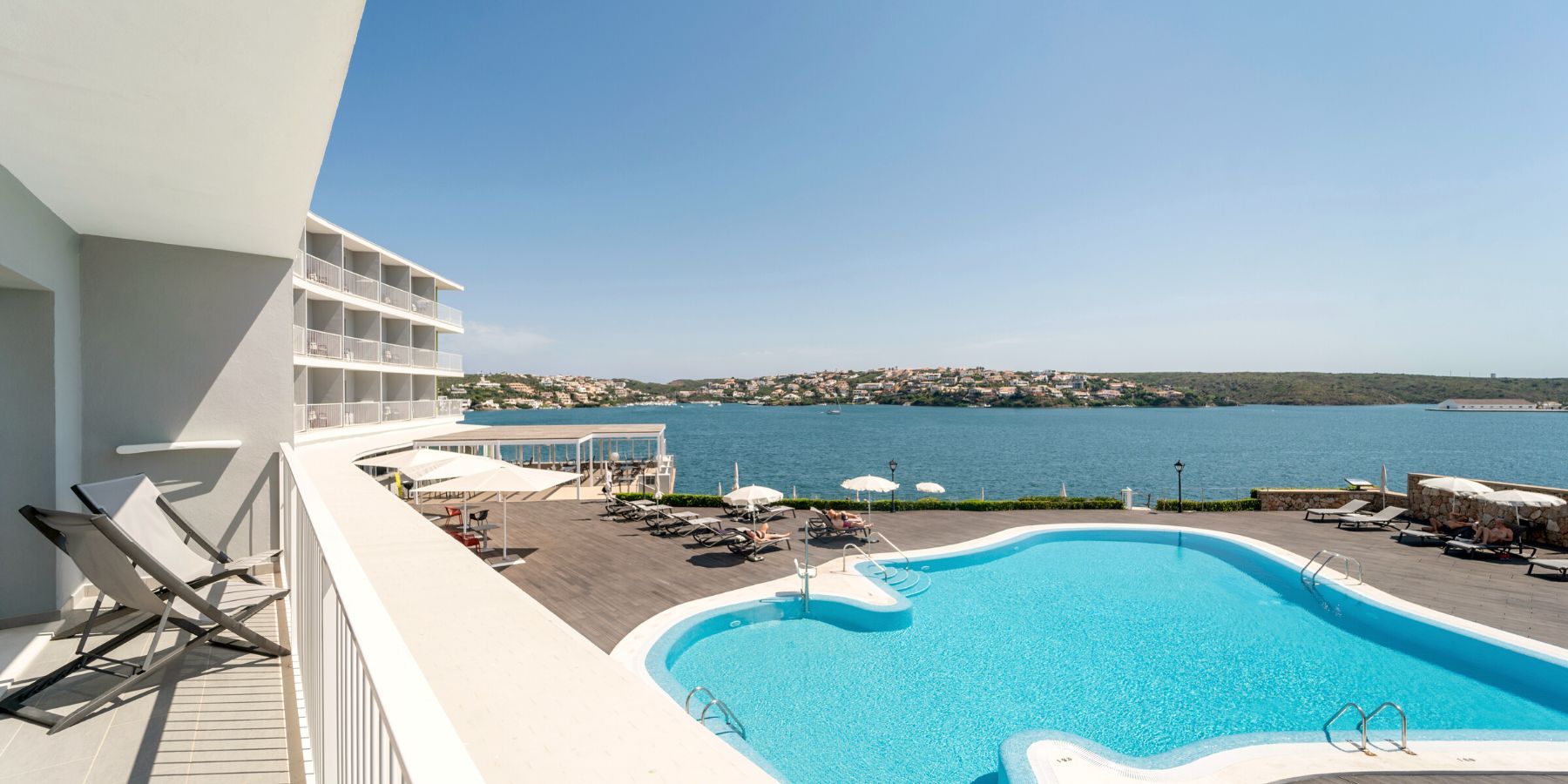 ARTIEM Carlos is located in the port of Mahón. It is the perfect hotel for relaxing and watching the ships go by, enjoying the local cuisine and breaking with routine in the outdoor spa.

ARTIEM Capri is the hotel for you if you prefer to stay in the city centre, as it is quite close to all that is going on and in a more urban setting. The Capri also has fantastic views from the rooftop and offers you the option of doing sport or taking a bath in the hot tub.

We also have apartments in the centre of Mahón, next to our ARTIEM Capri hotel.

If you are looking for a hotel in Mahón, choose either the Carlos or the Capri, depending on what your preferences are. We’ll be delighted to welcome you and recommend unique places to visit to make your stay memorable.

Wine route in Menorca: wineries for delighting your palate

5 lookout points in Menorca to dream about

DISCOVER OUR HOTELS IN